Whale Sharks at the Georgia Aquarium

By Luke on October 21, 2008 in Impressive Aquariums, Videos 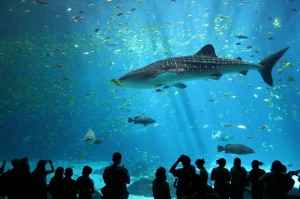 The Georgia Aquarium is a very impressive public aquarium located in Atlanta. The aquarium contains more than 100,000 fish and sea creatures.

The Georgia Aquarium is also the only aquarium outside of Asia that contains whale sharks. Simply put, they are amazing.

There were originally 4 whale sharks when the aquarium opened in 2005. Since then, two of the whale sharks have died but two more have been added. There currently are 4 whale sharks at the Georgia Aquarium.

If you want to see a huge aquarium with huge fish, then this is the place for you. The sights are eerie and beautiful at the same time.

Check out this video to get a view of one of the whale sharks swimming by. Be patient, the entrance is grand.