Yet Another New Cleaner Shrimp

By Luke on August 6, 2009 in Fish and Invertebrate 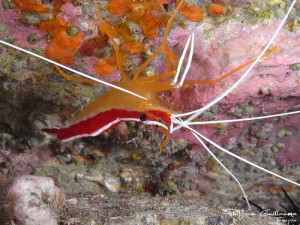 Ok, so I’m hoping the third time is the charm. I’ve just added my third Cleaner Shrimp to 75 gallon aquarium. The first was brutally murdered by a renegade Clownfish. The second Cleaner Shrimp was abducted by aliens apparently. Either that or he died, maybe he caused my nitrate spike but I never found him.

The new Cleaner, let’s call him “Cleaner Shrimp the III” is currently on his second day in the aquarium and is still active and visible.

I’m guessing that this new Cleaner Shrimp might last. He’s not hiding much, he’s out and active. He’s getting a lot of attention from my Orange Shoulder Tang and my Blue Tang, even though he won’t clean them yet. I’m guessing that he will be accustomed to the aquarium within a couple more days and will start cleaning those two Tangs.

I had to laugh at how popular the Cleaner Shrimp was the moment I added him to the aquarium. Pretty much most of my fish mobbed him within the first hour or two. The Cleaner just ducked back into the rocks like he was trying to avoid paparazzi.

The fish continued to mob around him but he wouldn’t yet clean any of them.

Today the fish have laid off him a bit. The two Tangs are still vying for his attention, and he’s not hiding in the rocks as much.

I’ll have to check on him again when I get home tonight and see how he’s getting along with his tank mates.

2 Responses to Yet Another New Cleaner Shrimp